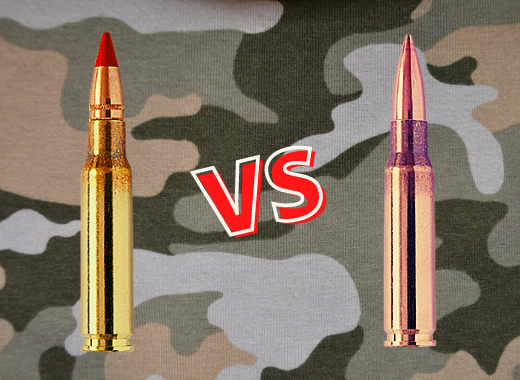 In military applications, 5.56×45 tends to be more effective and efficient. This is mostly due to its low recoil, very high velocity, accuracy and penetration power. When combatants don’t have to deal with any significant recoil, it is a lot easier to hit the same target more than once.

Here are some of the main differences between 5.56 and 7.62×39, broken down into speed, force and ergonomics.

A 7.62×39 bullet will travel at about 2349 feet per second, though this can vary slightly. These bullets are not very effective at significant ranges, and are considered useless beyond 400 yards. This is due to the fact that 7.62×39 rounds are quite large, and they do not have enough powder to reach a high enough velocity.

Still, the sheer force generated by these rounds is impressive, and they still travel fast enough for most standard engagements. Sniper rifles will generally use larger rounds with higher speeds, and 7.62×39 is typically used for battle rifles. Battle rifles are not designed to consistently hit targets at very long distances, so this is not a huge concern.

5.56×45 performs better than 7.62×39 in this category, as it is better optimized for distance. These bullets can travel at 3,260 feet per second, giving it a lead of almost 1000 feet per second. This means it will drop less over long distances, and wind drift will not matter as much.

If there is an engagement at a long distance, like 200 yards or more, the combatant using 5.56×45 is at a considerable advantage. They won’t need to consider environmental factors as much, and their bullets will reach their targets quicker. The combatant using 7.62×39 will have to deal with more muzzle climb, which will affect their aim much more.

Overall, 5.56 beats 7.62×39 in this category, as it is universally preferred for situations that need high velocity.

7.62×39 rounds are quite large, so the bullets themselves will create substantial wounds. 5.56×45 bullets are smaller, so they must be weaker in practice, right? Actually, the difference between the two rounds is more complicated than it may seem.

5.56 rounds are put through a tremendous amount of stress, and they tend to fragment when striking a target. This can often create more damaging wounds than a larger, more stable bullet, like a 7.62×39. 7.62×39 bullets travel slower, and are larger, so they usually punch through targets without much fragmentation.

In military applications, the ergonomics of a battle rifle is one of the most important factors of all. In mid-range firefights, whether or not a soldier hits a target can be determined by the recoil of their rifle. Of course, aim is important, but recoil heavily affects the accuracy of follow-up shots.

Ideally, a soldier should not have to consider the recoil of their gun very much.

The recoil of a 7.62×39 round is about double that of a 5.56×45 or .223 round. If you have ever fired both rounds, you will know that your shoulder feels the former much more. Neither of these rounds has an incredible amount of recoil, but the difference can definitely matter.

7.62×39 is also heavier than 5.56×45, so it is a lot easier for soldiers to carry around. When soldiers are hauling around equipment, including loaded magazines, it’s always better to keep it lighter. 5.56×45 rounds are also thinner, allowing their magazines to be smaller and more rectangular.

Overall, 5.56×45 is indisputably more ergonomic than 7.62×39, which is largely why the US military continues to use it.

There are a number of reasons why you may prefer one round over the other. 7.62×39 is much cheaper, hits very hard and is very common around the world. 5.56×45 is light, easy to shoot and still quite powerful.

Still, the US military has opted to use the 5.56×45 cartridge for all kinds of purposes. This round has served its purpose well, and it continues to play a part in major conflicts. For civilian use, it all comes down to which round you enjoy shooting more.

Many people prefer AK-47s chambered in 7.62×39 for their reliability, iconic appearance and power. On the other hand, the AR-15 is the most popular civilian rifle platform in the United States.

Both of these cartridges serve a useful function, and neither is considered obsolete.